WaterSpy ran for 3.5 years, giving time for all development & integration tasks, but also for the appropriate validation of WaterSpy subsystems. The work plan was structured in such a way, as to achieve quick delivery of the first results and allow a gradual validation of the approach in different situations. WP interconnection is shown in Figure 15. WP1 and WP8 were umbrella work packages, running in parallel with all activities throughout the project. WP2 was the first technical work package and provided input to the main technical WPs (WP3-4-5). Those three WPs were responsible for delivering all WaterSpy device modules. These modules were used as an input to WP6, which delivered the integrated WaterSpy device. Finally, the final, integrated and lab tested version of the WaterSpy device was used for the field validations in WP7.

WP1 was the management work package. This was an umbrella WP, running throughout the project’s lifetime.

WP2 dealt with the preparation of the system requirements and with its conceptual design. Current practices, user needs and pilot site details were collected and analysed. This WP set also the evaluation metrics for the system at a preliminary level. All requirements were used to prepare the preliminary, conceptual design of the WaterSpy system. Finally, the system technical specifications were delivered through this WP.

WP3 deals with the design and development of the quantum cascade lasers used as the light sources in the WaterSpy detection system. This is one of the most important technical work packages were the core photonics technology will be developed. The tuneable QCLs will be here developed and tested.

WP4 is responsible for the delivery of the photodetectors. The highly sensitive WaterSpy photo-detectors will be here developed, tested and integrated with the laser sources for combined tests. This is also a key core photonics development WP.

WP5 is related to the development of the ATR spectroscopy configuration and of all those sub-systems that will allow the automated operation of the WaterSpy device. In particular, the sample pre-concentration subsystem is here developed. The microfluidic configuration is also developed within this WP. Another activity of this WP will be the development and production of the specific antibodies against the single strains of bacteria selected, as well as their integration on the surface. Finally, the WaterSpy device processing electronics are here designed and developed, including the necessary firmware. Those are necessary to perform the data acquisition and pre-processing operations, as well as for communicating with the TRITON system.

WP6 is the integration WP. Integration in WaterSpy is seen as a parallel process rather than a static task of putting together all developed modules. Thus, it runs in parallel with all main development WPs (WP3-WP4-WP5), in order to make sure that specifications are followed and all modules are developed in compatibility with each other. Testing of the system in the lab is also dealt through this WP.

WP7 is responsible for the field testing activities. The device performance is also fully validated through this WP through comparisons with the golden standards systems. An impact assessment and usability analysis report for the device will also be here prepared. 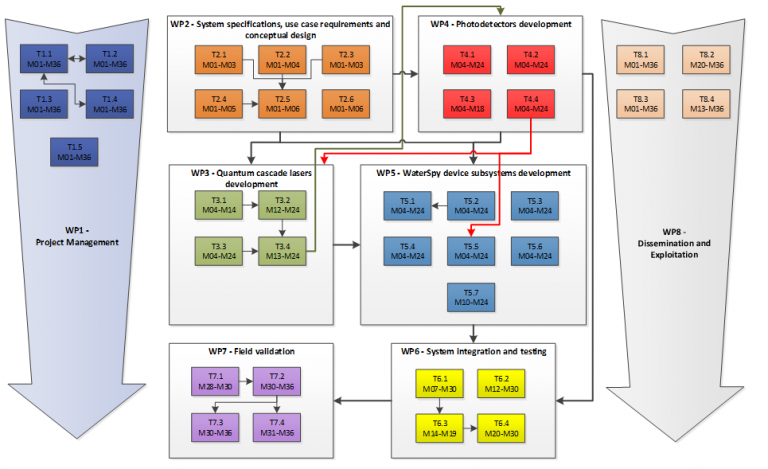 Interrelation between the Work Packages and the Tasks of the WaterSpy project (PERT chart).